This portable handheld device known as an infrascanner can tell in minutes whether a patient has a brain bleed.
Using the same technology as your television remote, a new portable device is about to land in New Zealand that can detect brain bleeds instantly.

The device, called an “infrascanner”, has been approved for use on our shores. It can pick up life-threatening brain haemorrhages and clots in head trauma victims injured on rugby fields, in nursing homes and in car accidents.

It scans a person’s skull, firing infrared signals into the skull to a depth of three centimetres, then shows a negative or positive result. 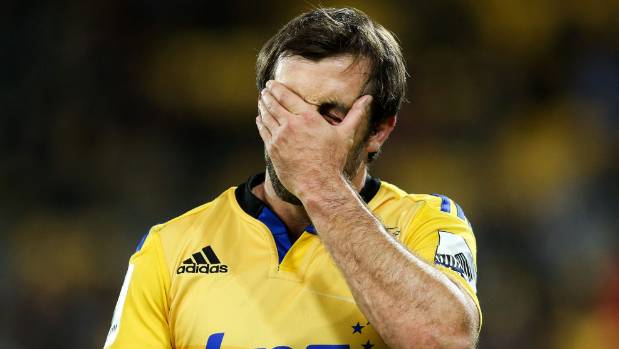 Conrad Smith of the Hurricanes holds his head after returning from a concussion test during a 2015 game against the Chiefs. The infrascanner could be useful for rugby teams in detecting injury, say its distributors.

“If it shows a red dot, you know there’s a bleed,” Peter Bailey, the sole distributor for infrascanner in Australia and New Zealand, said.
“It’s good in trauma victims because a bleed is close to the skull. There’s some research into whether it could be used in stroke victims, but basically you still need a CT scan.”

Bailey said the technology was developed in Israel, and was already used in the United States, India and parts of Europe and the Middle East in warzones, on sports fields and among frontline medical staff.

“It’s extremely valuable for rugby teams because, if somebody gets a concussion, it’s quick and easy to see if they have a bleed if you just put them on the bench.”

No-one in New Zealand has yet got their hands on an infrascanner, but the hope is for it to be rolled out among major sporting bodies, public and private ambulance services, trauma centres and remote healthcare facilities.

“Anyone can be taught to use it and the device can be used anywhere. The scan takes two to three minutes to complete and results correlate with CT scans.”

And if there’s no bleed, there’s the potential to save time and costs of further treatment and tests, Bailey, also a Melbourne paramedic said.

Wellington Free Ambulance head of clinical services Paul Fake had not heard of the device, but said his team was always interested in new technology that could improve patient care.

“We’re finding more and more that devices that were originally only available at emergency departments are becoming available to our people who are assessing and caring for people in all sorts of locations.

“What we call ‘point of care testing’ is becoming a feature of modern paramedic practice.”

The device has been used on Olympic athletes, in prisons, helicopter rescues and remote areas such as mines, oil rigs and rural areas with limited health resources.

The infrascanner is manufactured by InfraScan Handheld Brain Diagnostics nad has been in the making since about 2004, but this model had been around for less than two years, Bailey said.