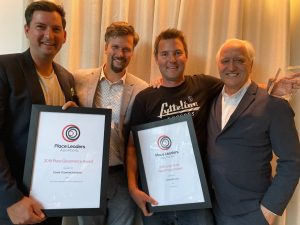 The team behind the beating heart of Christchurch’s most innovative and edgy District has been recognised at a major international awards. Ōtākaro and SALT District were last night awarded best Major Place Project at the Asia Pacific Place Leaders awards in Canberra, Australia.

Investor Mike Percasky, who is a trustee of SALT Collective, travelled to Canberra for the Place Leaders Symposium yesterday. He says, “It’s great to receive this award on behalf of SALT District. So many people have put in so much time and effort over the past few years and it’s fantastic to be recognised internationally for all that hard work. This award belongs to our SALT community”.

This win recognises best-practice placemaking over AUD$200k, by demonstrating excellence across five key criteria including sensitivity to the authenticity and local narrative of place, taking a systemic approach, showing agility and innovation and demonstrating clear value for people and communities.

According to Laura Taylor, placemaking advisor at Ōtākaro Ltd, the roots of the initiative were in late 2017, when organisations in the area chose to co-create a community housewarming party as a unique way to celebrate the opening of a new plaza. However, locals also recognised that the success of any great centre of innovation requires many elements including hospitality, retail, education and residents to truly spark. Those involved recognised that the future for this area would either be everyone remaining separate entities or making the choice to become a cohesive neighbourhood.

Local designer and branding expert, Josh Thompson, was called in to help explore an inclusive identity for the area as an alternative to Innovation Precinct. Josh created the concept SALT District based on shared values which were emerging for the area. In his proposal, SALT was not only an acronym for Southern Alternative and the locality around St Asaph-Lichfield-Tuam. It referenced many meaningful layers, such as the creative, effective and down-to-earth attitude of locals, the preservation of built heritage, and celebrating the connection between people and nature. This concept was shaped with the help of many and gained local buy-in.

City agencies including Ōtākaro, ChristchurchNZ, Development Christchurch Ltd, Christchurch City Council and the Central City Business Association have also got in behind the local initiative.

Bree Loverich of ChristchurchNZ says “placemaking is bottom up. The community, multiple city agencies, local businesses, developers and the Council have been coming together to collaborate under a shared purpose and shared values.” Stephen Hughes of DCL says “we were initially involved in what was originally a lighting project, and to see it evolve into the SALT District collaboration with projected street art and the successful collaboration with all the public sector agencies plus the private sector is a big tick for successful urban regeneration. The award is the icing on the cake.”

In another win for the area, SALT Collective Trust has just today received charitable status. The Collective has been established to enable collaboration between those in the area in ways that benefit both the area and the city. The project involved a boundary-pushing approach to community benefit under Charity law with support provided by Steven Moe at Parry Field Lawyers. “This project has been really exciting to be part of for the last few years and the passion of the people involved and the real potential it represents is exciting”, said Mr Moe.

SALT Collective trustee Stuart Charters, of Signal ICT Graduate School, says “it is fantastic to see the work of Ōtākaro and the SALT District community recognised for the placemaking that has happened and the vibrancy that has been built in the District. Building on this work, the formation of the charitable trust gives a great platform to facilitate future events and activities.”

The Collective characterises the neighbourhood as ‘the boss’, with the trust itself as an ‘under-arching’ entity to support collaboration. The trust will support the neighbourhood to regularly come together and keep learning about placemaking, connect locals with artists and young people, and will grease the wheels for collaborative action in various ways such as holding public liability insurance which local collaborations can call on.

Trustee James Meharry, Director of non-profit student radio station RDU98.5fm, says “RDU is peachy with pride for being part of SALT District. Massive congratulations to all those involved in building the story that gained such accolade – ka rawe!” The sentiments are echoed by trustee Leon Mooney of BizDojo co-working, who says “extremely proud of the efforts of the individuals behind the SALT District. A true example of the results being greater than the sum of its parts. Watch this space!”

Trustee Katy Clook from Friday Creative says, “We moved our studio to the SALT District for its vibe, energy and compelling cool. This award is an amazing acknowledgement of the work that’s gone into bringing SALT to life.

Locals are now forming subgroups around the passions and interests of locals to help the area succeed as a destination. These include groups focused on community activation, events, an urban festival, place experience, and ‘layers of fabulousness’. Subgroups welcome anyone who loves the area to get involved.

“The SALT project provides clear evidence that public-private partnership is the best way to deliver on the bold vision for our new city. We are all very proud of the community collaboration that brought this idea to life”, says Tim Loftus, General Manager Marketing, Brand and Communication at ChristchurchNZ.

“SALT District is a great example of how public and private entities, and a local community can work together to create a very special new part of our city. We’re proud to have played our part,” says Laura Taylor.

Other award winners included Town Team Movement, which took out the Place Governance category. Town Teams are model for how diverse locals and stakeholders can work together in a positive and proactive way to make great places for people. SALT Collective joined the movement recognising that it provided an excellent framework for how locals could lead and create impact. The Collective is New Zealand’s first Town Team, and the 36th of 44 neighbourhoods across Australasia to take the initiative.

The award comes on the back of some impressive collaborations earlier this year, when the District gained attention for the eye-popping SALT Ōtautahi mural, facing SALT Square by Little High and Alice in Videoland. Every night from 8pm the mural is animated with a spectacular laser projection that was launched in October at the District’s Highlight Street Art Party. Development Christchurch Limited made this possible by supplying the projector, which is available for other organisers to use to activate the city.

Owner of Not Without You wine bar, Phillip Sunderland, said “it was so great to be a part of the event. The laneways and square were bustling with people, despite the weather and everyone seemed very happy to be there. The new projection on the wall is sensational. SALT District proved itself to be an amazingly creative space.” Retropolitan owner, Danny Valentine, said “there was a great feel about the square and a very diverse group of people. We were very pleased to be part of it, what a great night”.

Next on the local agenda is Dux Central’s initiative to activate neighbouring Vanguard Square with table tennis, RDU’s popup music project, and work to complete the neighbourhood’s latest mural. The innovative artwork is being led by George Shaw of Oi YOU! and renowned local street artist Guy Ellis, known as Dcypher, of the DTR crew. Shaw says, “it’s fantastic that the place is being recognised. And it’s not stopping there. As we speak, we’re making even more progress with another mural, this one celebrates the area’s innovative history.”

The new projection in SALT Square, running nightly over the summer. Image: ChristchurchNZ. 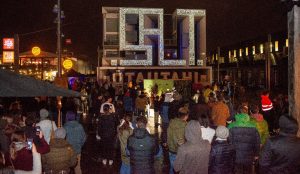 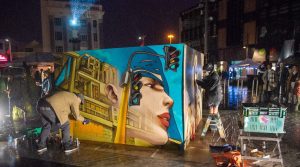 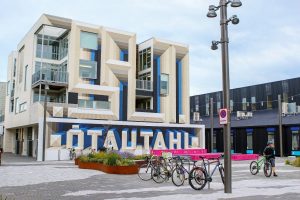