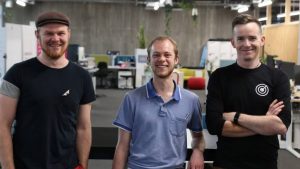 Farming by robot is no longer a fantasy, and it also could be a breakthrough for preserving our soil quality, a group of Kiwi entrepreneurs say.

Christchurch’s Radius Robotics is developing a wheel-based robotic system which would direct drill seeds with a minimal footprint, irrigate, weed and collect data.

Reducing the amount of land having to be tilled was one of its key aims, co-founder Henry Bersani said.

Soil was a carbon sink and so the less it was disturbed, the less carbon was released, and less water was lost.

“The more you pull up the soil, the more you expose it to the elements, you lose nutrients and the looser the soil is, the more prone it is to run-off.”

With climate change, water security was becoming a big issue. “In the United States, the Middle East and parts of Africa, it’s really critical that we find new ways of using water in agriculture.”

Soil degradation has become a major agricultural talking point, and although it’s a contested theory, there is a school of thought that there are only a finite number of seasons before the world’s topsoil is exhausted.

Bersani said there were some synergies between this thinking and technologies like theirs.

“The ultimate goal of what we’re trying to achieve is the large-scale automation of polyculture farming as opposed to monoculture, the idea that you plant multiple different species instead of hectares on hectares one single crop.

“By doing that, you’re able to restore that organic carbon content, the nutrient content, you’re deterring pests naturally through the mimicry of the natural systems.”

Automation could also reduce a farm’s reliance on labour. However, Bersani rejected the notion that robotics was just about taking jobs. In some parts of the world, farming labour was scarce.

“Quite often you’ve got enormous amounts of crops which are just going to waste because they’ve got no one to come in and tend to them.”

“There are some places that are really screaming out for that lower semi-skilled labour which just doesn’t exist because realistically mass migration into the cities.”

Radius was being careful how it described its system because it was still working on its patent, but the key was to cut the cost of production, Bersani said.

“What we’re trying to do is take the perspective of, what if we re-imagined arable cultivation from the ground up and took a really radical approach to it?

“Instead of saying, how do we strap a piece of technology onto a tractor and essentially do what we’ve always done, which is essentially another iteration on the beast of burden – how do we try and achieve a multitude of goals within a single system?”

“So while there’s some really amazing technologies out there, most of them are confined to one particular task. They’re either planting or they’re weeding, or they’re irrigating or they’re harvesting, and each of them have their benefits.

“But as far as we understand, we are one of the only companies that’s trying to address conventional farming on a number of different fronts.”

Robotics have been creeping into farming in various ways. Automated milking sheds have started appearing in New Zealand, and recently Japanese company Yamaha invested in Hawkes Bay company Robotics Plus, which has devised robotic apple packers and is working on a fruit harvesting robot.

Radius’ team of three includes Bersani; mechanical engineer Daniel Morris and chief executive Rob Swatton, who has worked in robotics and virtual reality (VR), and has an interest in permaculture.

The start-up is shortlisted for a Palmerston North agricultural accelerator programme and is a finalist in one of the country’s richest start-up competitions, Callaghan Innovation’s C-Prize.

C-Prize’s focus this year is on technology with the potential to improve the environment on a global scale.

Selected from 140 entries, the 10 finalists will each receive $10,000 to support their project and business mentoring over the next six months.

The winner, which will be announced in June, will receive $100,000 cash but also the institute’s help and connections to help them commercialise their product.