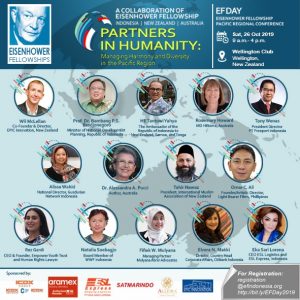 The objective of this collaboration is to strengthen multilateral relations between Indonesia, New Zealand, and Australia to address the challenges of achieving and maintaining social harmony and diversity, an issue relevant to  all three countries, by drawing upon the expertise of  EF Fellows in the region and in doing so also sparks rapid economic growth. This conference will bring together multi-stakeholders, including leaders from government, business/private, academia, media and not-for-profit organisations from the three countries.

Register for the event here:

Lately, we see in the region and beyond, societies torn apart by narrow-mindedness and primordial emotions. The Christchurch terrorist attacks shook its citizens and the world admired the way the government and the people of New Zealand managed the tragedy. The openness of the people of NZ and the solidarity shown to the minority Muslim community who were devastated by the attacks, displayed the nation’s resilience and commitment to inclusivity. The New Zealand response has been praised as setting a new standard for other countries in dealing with social tensions.

Indonesia, with its predominantly Muslim society, is the world’s third largest democracy, strives to uphold its ideology of Pancasila which guarantees the respect for and equality of all religious and ethnic groups. Australia is no less remarkable. A multi-ethnic melting pot, it has to manage a diverse nation and ensure harmony by upholding the rule of law without bias and prejudice.

How these countries falter or succeed in addressing the challenges of social harmony and diversity in a post-truth world are the key concerns of this Eisenhower Fellowship Day 2019 event. In addition, let’s not forget that being countries of diverse background, these three Pacific Countries are also rising economic power with their innovative and inclusive approach in financing activities. Thus, it will also be a challenge and opportunity how diversity can boost the nation’s economic growth instead of impeding it.