A group of Canterbury University students have created what they believe to be a world first – a fully recyclable electric car.

The little one-person, one-wheel drive car is undergoing final testing in Christchurch before being shipped to Singapore to compete in a global vehicle economy competition called the Shell Eco-Marathon.

Every year as many as 5000 students from universities and technical institutes compete in regional competitions in Asia, Europe and USA. The idea behind the competition is for the students to design, build and then drive the most fuel-efficient car. 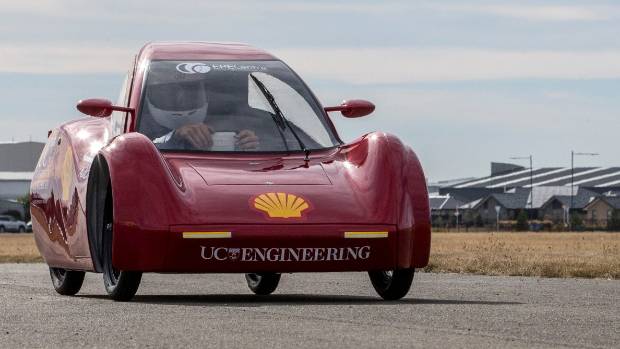 The Kiwi team will compete against 100 other teams in the Asian regional competition from March 16, and the successful teams will then progress to the world finals in London in June.

This is the first time a New Zealand team has competed in the eco-marathon in its 69-year history, said team leader Reuben Audley, a final year mechatronics student. 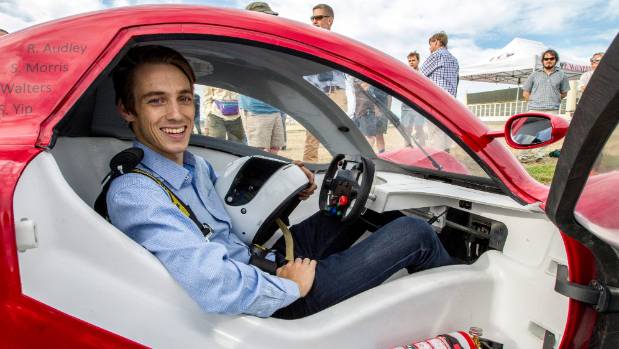 “Chief pilot” Frank Sullivan at the controls of the little 130kg car.

“Up until now none of our team of eight knew much more about cars other than how to change a lightbulb,” he said during a final testing display at Wigram.

“Maybe that’s why we didn’t want to go down the same old route in finding vehicle economy solutions. We also wanted our car to be recyclable. So we’ve made our car entirely out of vacuum-formed plastic, which we believe to be a world first.”

Testing of the little 130kg car, which produces up to 5kW of power from its battery pack and does up to 40kmh, has already shown it to be a potential winner. 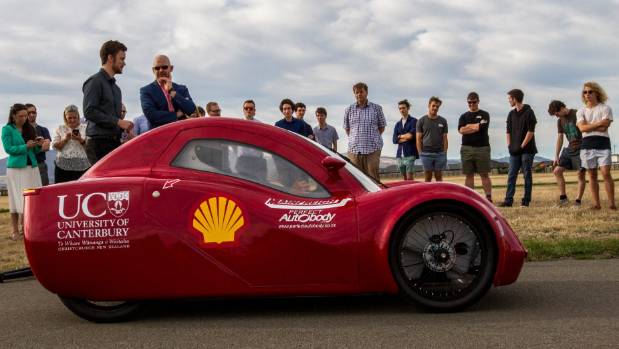 The eco-car isn’t very big – but it doesn’t consume much energy either.

In the last eco-marathon the winning electric car achieved an energy consumption of 76 kilometres per kilowatt hour over the competition’s set distance of 12km. But in testing so far the New Zealand car has already achieved 105km per kilowatt hour.

And the team is still learning, student and “chief pilot” Frank Sullivan said.

“What you have to do is speed up and then coast, and when you are coasting you can regenerate the battery. But we’re still learning the best ways to do this,” he said.

The whole point behind the eco-marathon is to inspire engineers of the future to turn into reality their visions of sustainability and energy efficiency, said the chairman of Shell New Zealand, Rob Jager.

“We’ve been hoping for some time that a New Zealand team would participate in this competition.

“We’re delighted that this group of young people from Canterbury University have taken up the challenge.”